Integrity hour at the faculty of business and law 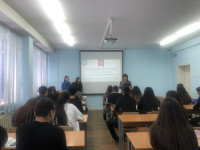 The United Nations proclaimed December 9 as the International anti-corruption day.
In this regard, on December 9, 2019 in all academic groups of the faculty of business and law held the event "Parasattylyk sagattary", "Hour of integrity" aimed at improving the legal literacy of students, the formation of anti-corruption culture in the student environment and intolerance to corruption.
The event held in discussion and game forms. Students were explained the main provisions of such normative documents as the anti-corruption strategy of Kazakhstan for 2015-2025 years, the Law "On combating corruption", and the main provisions of University regulatory document "Code of academic integrity". Members of the University student community "Sanaly urpaq" took part in the organization and development of some events.

XIII Youth Spartakiad for prizes of Akim of Karaganda region. 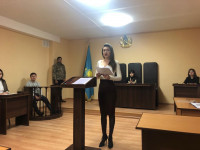 4.12.2019 senior lecturer of the Department of "General Legal and special disciplines" Rakhimgulova M. B. in the group Yu-36s was held an open practical lesson on the discipline "Advocacy". The lesson was held in the form of a game trial.
The purpose of the lesson was to form the skill of applying law to a specific situation, to develop such professional skills as teamwork, effective legal research, building arguments, public speaking.
This form of training allows students to deepen their knowledge of the discipline "Advocacy" and consolidate knowledge on the subjects of "criminal procedure" and "Criminal law".

Congratulations to Professor Balgimbekov D. U. with the title of "Best worker of science" in the field of higher and postgraduate education. We wish not to stop there, constantly improve and develop professionally and personally. Department of "General Legal and special disciplines".

Round table: «Modern Kazakhstan. The Leadership Lessons Of The Nation».

On december 1, 1991, our country elected its first President as a result of national elections, and the history of Independence began with this. Therefore, in 2011, the Parliament adopted the law "About entering of addition into the law RK "About holidays in the Republic of Kazakhstan" according to which December 1 was adopted as the state holiday - the Day of the First President of the Republic of Kazakhstan.
By this decision, the Parliament of the country not only exalted a great personality, but also gave an appropriate assessment of the status of the institution of the presidency.
The first President of the Republic of Kazakhstan Nursultan Nazarbayev is the founder of the new independent state, who ensured the unity of Kazakhstan, protection of the Constitution, human and civil rights and freedoms.
At the round table were: Abilov K.Zh. - vice-rector for social Affairs, Badel A.-senior lecturer, master of the department «SR and APK», a student of gr. SR-41k Kenshilik Albina and student gr. SR-18-1 to Azine Shynargul.

On the online platform «Ruhani zhangyru» held a training online a training seminar on «Planning, implementation, monitoring and evaluation of the implementation of social projects». Work with the media and promotion of projects in social networks for students of educational programs «Social work» and «Fundamentals of law and economic». The seminar was held by a Member of the ANC Council, a Member of the expert Council of the ANC NES, Chairman of the special monitoring group of the anti-corruption Agency for Nur-Sultan SH.A. Ismailov.
During the training, students updated their knowledge and formed practical competencies for planning and implementing social projects, working with the media.

THE OLYMPICS «A CONNOISSEUR OF THE LANGUAGE»

On November, 2019 was passed the Olympiad on subjects among puppies of schools of the city, organized by the Department of kazakh language and culture of Kazakhstan.
The competition was attended by above 250 pupils from 9-11 classes from 33 schools of Karaganda and Saran. The participants were tested in two rounds.

Partner of KEUK- company Efes Kazakhstan IP JSC invites students of all specialties (2, 3, 4 courses) to the two-day interactive EFES WEEK, which will be held on December 5-6 at 16.00 in the Coworking Center.
In the program of the meeting: Presentation about the company, Training; A draw of fashionable prizes among students who will visit about the day.
Students will also be selected to undergo paid practice at the enterprise. 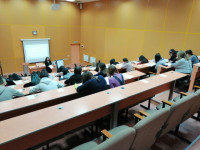 Open curatorial hour on the topic: “We are against corruption”