We continue our good traditions… 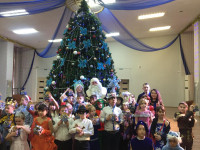 On December 26, 2019, within the framework of the Charity event "Shyn zhurekten", the Faculty of Economics and management organized a trip to DDU, where a new year tree was held for children of primary classes of boarding school No. 4 in Karaganda. Every year, according to the good tradition of the faculty, a fundraiser is held, in which all students and faculty members take part. The student Committee of FEU with the support of its permanent sponsor LLP "crystal Water" has carried out the presentation of delicious gifts for 115 primary school children.
We thank every student, teacher and employee of FEU, as well as the management of "Hrustalnaya Water" LLP for their response and assistance in organizing this action!

On December 12, 2019, in honor of the professional holiday "customs officer's Day", for career guidance, the Department of "General Legal and special disciplines" of the faculty of Business and law of the Karaganda economic University of Kazpotrebsoyuz held an intellectual game on the theme "Border security-the key to sustainable development". The intellectual game was attended by students of the University and College of EBP and MGTC. The head of the Department of customs administration Akbiev M. K. was invited as a jury, who held a fascinating conversation about the work of customs authorities. According to the results of the intellectual game, the participants were awarded diplomas and prizes.

Congratulations to the folk ensemble "Nazkonyr"!

Congratulations to the folk ensemble "Nazkonyr" with obtaining Laureth 1 degree in the II International competition-festival of creativity "New year rhythms of the East" Nur-Sultan! We wish you new creative achievements! 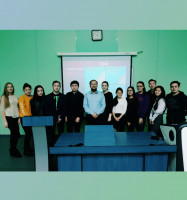 In anticipation of the opening of the "V2020", Auzhanov Askar, who is a regional trainer in the field of volunteering, visited the Karaganda Economic University of Kazpotrebsoyuz. Upon arrival, he conducted training for our volunteers, on which topics such as: the correct formulation and achievement of their own goals, faith in oneself, what true happiness is, spiritual values and the meaning of volunteering were raised. The meeting was very interesting. Auzhan Askar gave many examples from his life, talked about how he personally came to this position. The volunteer work of Auzhan Askar very impressed our volunteers and even motivated to achieve great heights.

THE MUSICAL AND POETRY MATINEE "EVERYTHING BEGINS WITH LOVE ..." 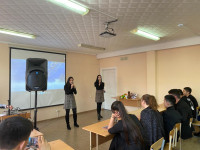 Teachers of the Foreign and Russian languages Chair Bazarbekova S.A., Gainutdinova G.F. and Nurkeeva B.A. held the musical and poetry matinee with first year students from Kazakh groups.
The purpose of this event is creating the esthetics of feelings, developing the skills of expressive reading of prosaic and lyrical texts; improving the skills of oral speech, fostering a sense of esthetic pleasure in meeting with works of art.
"Love is the most poetic, sublime, pure and beautiful feeling. The theme of love is inexhaustible, because this feeling is forever, always new and unique ... ", - such words can characterize all the performances of students at this event. 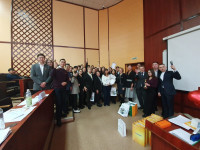 On December 6, 2019 in KEUK the Department "Bank management and financial markets" held the Republican subject Olympiad "Leader-Financier of the XXI century" among students of Universities of Kazakhstan, Russia and students of colleges and schools, dedicated to the day of the financier.
Among the invited Universities took an active part, Kuban Krasnodar, NARKHOZ., Almaty, KazNTU im.S. Seifullina G. Nur-Sultan, Pavlodar state University. S. toraigyrova, EITI.K. Satpaeva G. Ekibastuz, University "Turan" Almaty, KABP Karaganda, Financial Academy Turan Nur-Sultan and our KEUK Karaganda. Also among the invited guests were top managers of commercial banks and LLP of Karaganda, students of KEUK, students of colleges of KABP and KTL No. 1.
The subject Olympiad consisted of 3 rounds ("presentation of projects", "magnificent seven" and "zhorga"). The Olympiad was held in a sharp struggle. All teams once again showed excellent knowledge in the field of Finance. According to the results of the Republican subject Olympiad "Leader-Financier of the XXI century" places are distributed as follows:
Grand Prix:, Kuban Krasnodar and Karaganda CAMP
1st place: NARKHOZ Almaty, Turan-Almaty and KazATU.S. Seifullina G. Nur-Sultan
Turan-Astana Nur-Sultan
2nd place: Pavlodar state University. S. M. Turan-Astana and EITI them.K. Satpaeva G. Ekibastuz
3rd place: KEUK.
CONGRATULATIONS!!!
The next subject Olympiad is traditionally planned in 2020 year.

Congratulations to the university staff on successful institutional accreditation at Independent Agency for Quality Assurance in Education (03/12/12.-05/12/2019). 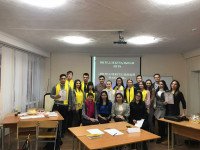 December 5, 2019, the Department of Legal regulation of economic relations, held an "Intellectual marathon". The purpose of the intellectual game is to stimulate the interest of College students in their future specialty "Jurisprudence", to consolidate the basic theoretical knowledge in the basic branches of law, Patriotic education of the younger generation, its intellectual development, the creation of a system of cooperation and partnership between the University and secondary professional educational institutions.
CONGRATULATIONS to the participants and nominees of the game students Of the College of Economics, business and law and 2nd year students of the specialty "Jurisprudence" KEUK! 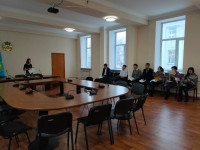 09.12.2019 the Department of postgraduate education held a presentation of educational programs of master and doctoral studies in the Department of Treasury in Karaganda region within the framework of career guidance.
Chief specialist Fazletdinova Zlata Danilovna and Methodist Kyzylova Zhanetta Yergalievna provided information on admission to master's and doctoral studies, as well as detailed and answered all questions of practitioners. 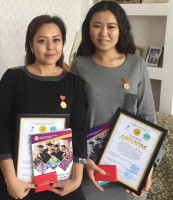 The Department of postgraduate education congratulates the 2nd year undergraduates of the educational programs "Accounting and audit" and "Marketing and logistics"Hasenova Marya Erlanovna and Zhapbasova Talshyn Berikbayevna on the victory in the Republican contest "The Best undergraduate of Kazakhstan-2019". We wish you further victories and success in your studies !

Olympiad on the history of Kazakhstan 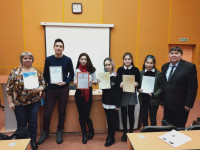