February 7 - "Day of open doors""» In the police Department of the Karaganda region. 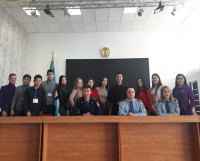 Associate Professor Karzhasova G. B. of the Department of "General Legal and special disciplines" held an open class on the subject: "Procedural law of the Republic of Kazakhstan» 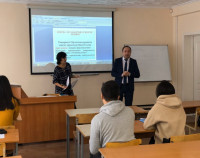 29 January 2020 in the framework of the discipline of "Procedural law of the Republic of Kazakhstan" among students of the group TD-32, specialty: 5v030400 "Customs" by Professor G. B. Karasabai was held an open lesson on the theme "Claim as a means of protection of infringed rights". During the lecture, the students were informed about the specifics of conducting and preparing procedural civil procedural documents during the lawsuit.
Guests of the open session: Video clip: Amangeldin Aibek Timurovich-judge of the Almaty district court of Nur-Sultan (civil jurisdiction), associate Professor of the Department of civil law and process of the Academy of justice at the Supreme Court, master of law.
Akparov Diyar Bakytovich-Head of the legal Department of "company "Autocenter Bacchus" LLP, Member of the chamber of legal consultants "Ekpert PRAVA» 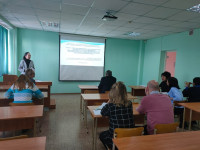 On January 25, the Department of Management and Innovation, jointly by an international trainer, professional coach, official representative of the expert-analytical association Prof-Dialogue Tasbulatova Balsulu, conducted a training on the topic "Coaching tools in education" for the teaching staff of the Gymnasium of 38 Karaganda.
For members of the administration of the gymnasium and partner schools, the training "New in the selection and assessment of staff effectiveness" was held. The participants got acquainted with the methodology of complex diagnostics on issues of vocational guidance. Using the example of a school’s problem, the group members tried to draw up the Wheel of balance and think over the steps to solve a specific problem. After the event, all participants received certificates. 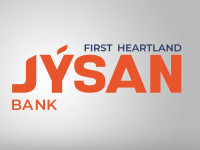 Тhe Department of "Banking management and financial markets" headed by the head of the doctor of Economics, Professor T Alimova L. A., also the faculty of the Department passed an internship in the CF of JSC "Zhusan Bank" in Karaganda.
Top managers of Zhusan Bank JSC held master classes, delivered lectures, and demonstrated presentations about the Bank's activities.
As a result of the internship, participants were awarded certificates of JSC "Zhusan Bank".

The action of cleaning of snow 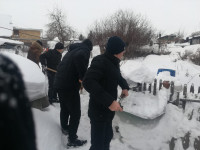 On January 25, 2020, volunteers and activists of the faculty of business law and technology took part in a snow clearing campaign as part of the national project "Birgemiz".
The guys helped veterans, single pensioners and people with special needs to cope with snow drifts. At the end of the work, the guys launched a challenge in social networks passing the baton and calling on students of the city, as well as caring people to support the action.

Round table "The use of professional standards of transport logistics in enterprises, educational institutions and certification centers of specialists" 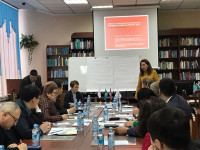 On January 23-24, 2020, a round table was held at the Karaganda Economic University of Kazpotrebsoyuz, in which experts and specialists from transport logistics enterprises of the city of Karaganda, the Chamber of Entrepreneurs of the Karaganda Region, the KAZLOGISTICS Union, colleges, training centers specializing in transport logistics qualifications of the Karaganda region participated .
Participants of the round table discussed the relevance of the practical application of professional standards (PS) “Service of the cold supply chain” and “Logistics of the wholesale business”, “International freight road transport”, “Management and maintenance of the transport and logistics center” at enterprises, training centers, colleges, universities . 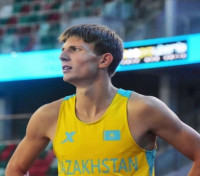 David Efremof (group FKiSM-19-4s) has fulfilled the standard for the World Cup and received international-class masters of sports in the 60-meter race with barriers 7, 67!
P.S. Beautiful seconds, huh? And also this is the RK record in hurdles, which was set back in 1992 by Andrei Gutov and amounted to 7, 78 seconds.
Our student is going to turn 21 on the 15th of January. We hope this record won’t be the last in his sporting career.

BEST TEACHERS OF THE UNIVERSITY 2019

By the decision of the meeting of the Republican Competitive Commission of the Ministry of Education and Science of the Republic of Kazakhstan on awarding the title of "Best University Teacher" in 2019, Deputy Dean of the Accounting and Finance Department, Ph.D., Associate Professor Sayfullina Yu.M. and Ph.D., professor of the department "Marketing and Logistics" Sarzhanov D.K. became the owners of the title “Best University Teacher of 2019”.
The teaching staff congratulates Yulia Magdatovna and Dauren Kazhabergenovich on receiving the title and wishes them creative achievements and successes in educational activities. 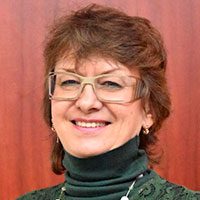 Volunteers congratulated the children on the New Year!

On the Eve of the New year, our volunteers organized an action called "New year-a family holiday". The purpose of this campaign is to support and assist low-income and large families. As part of this campaign, volunteers visited families and gave gifts to children raised in low-income and large families. During this event, more than 10 families and 30 children living in various districts of Karaganda were covered.