Olympiad on "Fundamentals of state and law" 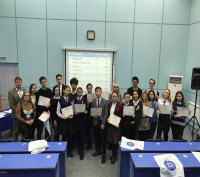 On November 22, 2019 in the Karaganda economic University of Kazpotrebsoyuz was held the Olympiad on "Fundamentals of state and law" among pupils of 10-11 classes of schools of the city of Karaganda organized by the Department of "General Legal and special disciplines". The event was held in order to attract and support talented young people interested in state and legal problems. Teams of KSU №63, KSU "Gymnasium №9", №85, "Murager",№62"participated the Olympiad. The participants of the schools applied their knowledge to perform a variety of individual and team tasks, gained invaluable experience for further professional orientation.
Following the Olympics, the diploma of I degree awarded team "Zheti Zhargy" specialized boarding school "Murager", the diploma of the SECOND degree team "Algyrlar" gymnasium №38, a diploma of the THIRD degree team of school №85. All participants were awarded letters of thanks and valuable gifts.