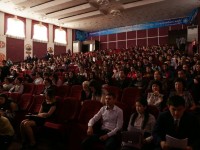 In April 26-27, 2017 the Karaganda Economic University of Kazpotrobsoyuz held the International Student Meeting "The New Generation. New energy. A new era." The motto of the meeting were the words "Youth. Science. Innovation".
The purpose of the meeting: the development of students' science, identification and support of talented youth.
The tasks of the meeting: increasing communication between students of different countries; the improvement of the university innovative environment; the formation and expansion of the base of student research and innovation projects; the expansion and deepening of the links between research, business and government structures.
The work of the meeting covered 5 main events.
The International Scientific and Practical Conference "Modern World and Youth: a Vision and Dialectics of Development" was held. The conference was attended by more than 400 students, undergraduates, graduate students and doctoral students.
The 40 articles from the CIS and far abroad countries were received for consideration. The representatives of Kazakhstan, Russia, Italy and Belarus performed speeches at the plenary session. There were 7 sections with 6 subsections in various scientific areas.
Within each section and subsection, the best speakers were identified, who received first, second and third degree diplomas, the diplomas according to five nominations: "The Best Speaker", "The Best Presentation", "The Best Argument", "New Vision", "Competence and Creativity". As a result, the compilations of the conference materials were prepared: the first volume with the printed format (310 pages in a volume), the second volume of electronic format (700 pages).

The second important activity of the meeting was the competition of innovative projects "Contribution of youth to the future". More than 50 projects from the universities of Azerbaijan, Belarus, Kazakhstan, Russia and Ukraine were presented for the competition. The winners of the contest of innovative projects were awarded with diplomas of the winners of the 1, 2 and 3 degrees as well as valuable gifts. In addition, the diplomas were awarded in 12 nominations.
The third and fourth areas of the meeting were focused on the disclosure and development of business for young people. The business-trainings in Kazakh and Russian languages were held at two sites.
The fifth area of the meeting included the cultural and entertainment program. The first day is represented by the program of an ethno-concert, performances of the theater of fashion of the students of the KEUK, the choreographic ensemble "Zhaina". On the final day the jazz orchestra "BIG-BAND" performed on the stage.
The organizers of the meeting believe that this student forum was held in the atmosphere of creative inspiration and fruitful scientific dialogue.