Participation in the Exhibition “Kazakhstan’s Education Days in Uzbekistan” 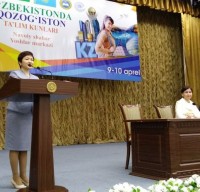 9-10 April 2018, head of the Department SWandAPK Abdakimova M.K. participated in the fair “Kazakhstan’s Education Days in Uzbekistan”, which took place in Youth Center of Navoi city of Navoi oblast of the Republic of Uzbekistan. The 26 leading Higher Educational Universities of Kazakhstan were presented at the Exhibition.
The Exhibition hosted a meeting with graduates and students of colleges and schools of the region, and with their parents, as well as school, colleges and lyceum teachers. They were provided with information about the conditions of admission and study at Karaganda Economic University.
During the trip with career guidance were visited Navoi State Mining Institute, Academic Lyceum, located in Navoi, as well as agricultural and economic colleges, which are located in the district center of Kanimekh with compact residence of ethnic kazakhs and karakalpaks.
During the meetings, were provided extensive information about KEUK, conditions of admission and training on the daily and remote offices, distributed information brooklets, brochures, answered questions. As a result, a preliminary list of potential applicants wishing to enroll in KEUK was drawn up.
For active participation in the scientific and educational forum Abdakimova M.K. was awarded a letter of thanks from the governor of Navoi oblast.