The article of the Head of State with college students discussed 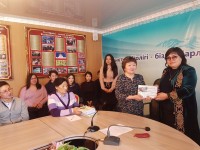 Candidate of Legal Sciences, Associate Professor of the Department of "General and Specialized Disciplines" Baiengina Kulbagila Aliyakparovna visited the Zhezkazgan Business Transport College in Zhezkazgan, met with students and discussed the main provisions of the article of the Head of State Nursultan Nazarbayev "Looking to the Future: Modernizing the Public Consciousness ".
In the form of discussion and exchange of views, they touched upon issues that particularly concern the younger generation: education and employment, a vision of oneself and one's role in building modern Kazakhstan. During the conversation, an important point was touched upon, that often young people are poorly versed in the current political situation and, despite the active work of the media, relevant authorities to cover new policy documents on the further development of the Republic of Kazakhstan, this problem remains not fully resolved. In this case, an active public position of students is important, which can provide significant help, telling their peers, in their environment, in a simple and accessible language, what is being said from a high political platform.
Students said that at the heart of this true patriotism lie the knowledge of the history of their land and state, respect for both the cultural values of their country, and respect for their compatriots. 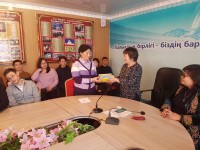