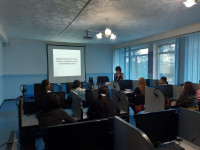 The annual language contest of foreign languages (English, Kazakh, Russian) among students of schools and colleges of Karaganda city was held by the Chair of Russian and Foreign languages.
60 students took part in the contest, 14 schools of Karaganda, Temirtau and Zhezkazgan applied. There were 2 parts of the language contest: testing and presentation in 3 languages. The winners were awarded with diplomas.

We thank all students for active participation !!!