The right choice of profession is the key to a promising future. 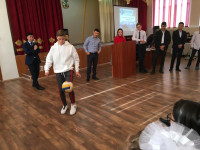 Teachers of KEUK Isanov A. S., Yusupov M. T., Minzhanov M. N. and students-volunteers in Abay carried out large-scale professional orientation work for graduates of schools of this region.
Abai district is always famous not only for its scientific achievements, but also for sports results. From them it is possible to allocate Champions and prize-winners of the Olympic games and superiority of the world, such as Sapiev Serik, Zhusupov Abylaykhan, Maskaev Oleg, Ragozina Natalia and many others.
Every year, the number of people coming from Abai district to our KEUK grows every year. This is evidenced by statistics for the last 5 years. And there are certain explanations for this.
The vocational guidance meeting was held on October 14, 2019 in Abai "Department of education" and gathered all schools of Abai including Dubovka village.
Video clips are shown to graduates, information booklets about our University are distributed and questionnaires are filled in. Also for graduates competitions of stuffing of a soccer ball and game "Darts"were held.