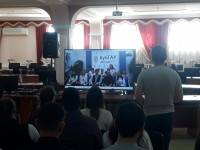 The Department of “World economy and international relations” of the Karaganda Economic University of Kazpotrebsoyuz held an online meeting with partners from the Kuban State Agrarian University as part of the cooperation agreement between two universities. The conference themed “Historical memory of the Great Patriotic War in minds of the youth of two countries” was dedicated to the 74th anniversary of the Victory in the Great Patriotic War.
Students of the KEUK Yesekeeva Anetta, Zhenіskhan Gulimay (supervisors Kaliyeva G.K., Sapar A.D.) prepared informative reports, revealing the historical role of the Victory of Soviet troops over Nazi Germany.
The dialogue held between the students of the two countries demonstrated the desire of today's youth to preserve peace and harmony on the planet, their knowledge of history of the Great Patriotic War, and respect for the heroism of the older generation. 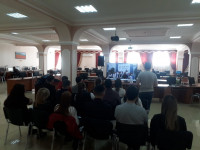