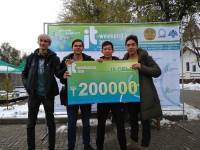 Within the framework of the forum, IT-Weekend.kz-2018 project competition was held among students of colleges and universities of the region. In total, 26 teams participated in the student hackathon, whose task was to create social and economic projects capable of solving the problems of the Karaganda region. For the participants, master classes from leading world and Kazakhstani specialists in the field of information technologies were held.

The results of the competition were announced on October 20, 2018. Head of the Karaganda region E. Koshanov, director of development and co-owner of the payment system "WOOPAY" A. Doroshenko, representative of the Government of the Republic of Kazakhstan P. Kazantsev, 3D designer I. Zinchenko, Google programmer B. Zhilko and others took part in the award ceremony.

According to the results of participation in the competition, the students of College of Economics, Business and Law took the 3rd place. They received a certificate in the amount of 200 thousand tenge. 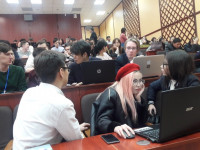