WE CONGRATULATE ON THE PRESIDENTS OF THE IX REPUBLIC STUDENT'S OBJECTIVE OLYMPIAD!!! 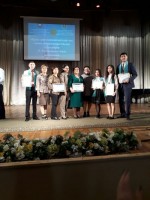 April 20-21, 2017 on the basis of Taldykorgan Zhetysu State University them. I.Zhansugurov passed IX Republican student subject Olympiad among students of 1-4 courses of full-time enrolled in 5V011500- "Basics of Law and Economics", which, under the candidate of pedagogical sciences, associate professor, head of the department SW and SPD Abdakimovа M.K., received a group of students participating OPEC-21к. Of the 9 teams participating in the Olympic Games, our team of Isayev Aituar, Қanatuly Zhanaidar, Yerzhan Makpal, Berikbay Assem took 3th place. The team were awarded the diplomas, certificates and valuabie prizes.
On behalf of the staff of the department Congratulations to winners of the Olympic Games and wish them further success in research!