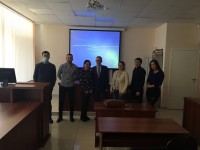 From 12 to 19 March 2017 master students of the specialties «Jurisprudence» and «Customs» passed a scientific internship at the Ural State Law University (Yekaterinburg, Russian Federation) under the program «Modern aspects of foreign economic and international law».
The program of scientific internship provided the study of the most relevant problems of the development of foreign economic law, the international civil process, rights of WTO, the practice of international tax law and other topics disclosed in the perspective of ongoing legal reforms and the introduction of new mechanisms of work based on the modernization of the legal system of the Russian Federation. Also, the program of scientific internship supposed a practical orientation field training on the basis of the Arbitration Court and the Statutory Court of the Sverdlovsk region, which helped to students to explore the modern judicial system and the peculiarities of the new legal procedure in Russia. At the same time students worked with the scientific literature on the subjects of their dissertations in the library of USLU.
At the end of the internship all master students received certificates.