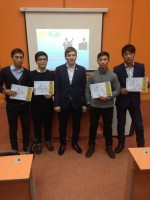 In celebration of the 25th anniversary of Independence of the Republic of Kazakhstan December 8, 2016 Department of Economic Theory and State, local governance and organized debate rules game on the theme of «Nurly Bolashak». Intellectual Debate game was in the «APF» format (American parliamentary format). Speakers discussed the topic «This House calls the most important achievements of Kazakhstan during the 25th anniversary independence». We discussed the current problems and prospects of development of economy and social sphere of Kazakhstan. Participants of the game awarded letters of appreciation.