Victorin in the dormitory of KEU №3 on a theme "25year of independence of RK". 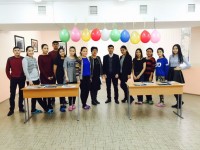 On October, 13, 2016 teachers of department "banking" of Еrmekova K.A., Issanov A.S. and group F-21с/k together in a dormitory №3 conducted a quiz on a theme "25year of independence of RK".
In a quiz students took part resident in a dormitory №3. An aim of quiz is propaganda of patriotism, friendships between people, active and cognitive way of life, love to the motherland.
Victorin consisted of 3th turns. During a quiz also an audience, fans-students, took part actively. After completion of quiz to the students, accepting active voice, distributed gifts, valuable prizes.