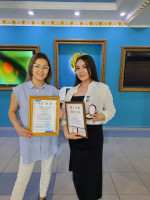 On April 20-21, 2021, Nur-Sultan hosted the International Competition "The Best Young Scientist of the CIS-2021" among scientific and educational institutions of the Commonwealth of Independent States. This competition was attended by the best young scientists who made an invaluable contribution to the development of science and education in the entire Commonwealth of Independent States. The main purpose of this competition was to promote science and personal success of young scientists from the CIS and Europe, to form the scientific base of the III International Book Edition of the CIS countries, to inform the scientific and pedagogical community about the development of science in the CIS and Europe, to develop international cooperation for the benefit of further integration of science. Young scientists of the Republic of Kazakhstan, the Republic of Belarus, the Russian Federation, the Republic of Uzbekistan, the Republic of Tajikistan and other countries took part in the competition.
Karaganda University of Kazpotrebsoyuz was presented by a 4th-year student of the Faculty of Economics, Management and Entrepreneurship of the educational program "International Relations" Gisa Dana Meyirlankyzy. According to the results of the competition, a student of our university was awarded a medal and a diploma of the first degree "The best young scientist of the CIS-2021!". The best scientific works of young scientists were also published in the III International Book Edition of the CIS countries.
A year before this event, Dana was also awarded the "Best Student of the CIS-2020" award.
Congratulations to Dana on her well-deserved victories! We wish you further success in all your endeavors and scientific work!