Lecture "Corruption as a social phenomenon". 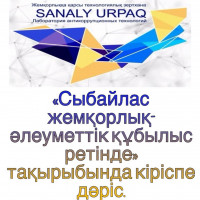 07.10.2020 for first year students of the Karaganda economic University Kazpotrebsoyuz a discussion was organized on the topic: "Corruption as a social phenomenon". As part of the work plan of the student community "Sanaly urpaq", the lecture was delivered by the head of the student community "Sanaly urpaq" Orynbekov A.S. and the Chairman of the Community Rakhtayeva I. E.
The purpose of the discussion is to give a General idea of various forms of corruption, its manifestation as a social phenomenon; features of its manifestation in various spheres of life, causes, harmful consequences of this phenomenon; to form skills of adequate analysis and personal assessment of this social phenomenon; to form a set of knowledge that ensures behavior in accordance with legal and moral and ethical standards in corruption situations; to stimulate motivation of anti — corruption behavior among students.
During the speech, the lecturer told the audience about the history of corruption, measures to punish corrupt officials, as well as methods to combat this crime. Special attention was paid to the causes and consequences of corruption in modern society. Economic, institutional, and socio-cultural reasons were identified as the main reasons. The negative consequences of corruption in the economic, political, social and spiritual spheres of society are also noted and listed.
Summing up, it was noted that the fight against corruption is really our common duty. Only by joint efforts of both state and public authorities can any significant results be achieved. If today young people do not join the ranks of corrupt officials, then in a generation there will be no trace of corruption without any struggle.