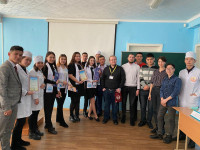 The Chair of Foreign and Russian languages held a competition "Multilingual Student" among students of non-language disciplines who speak Kazakh, Russian and English; the competition was held to motivate students of the university to learn languages.
According to the results of the competition following teams were awarded with certificates:
I place – Karaganda State University of the name of academician E.A.Buketov;
II place - Karaganda Economic University of Kazpotrebsoyuz;
III place – Karaganda Medical University.
Members of the competent jury noted the high level of preparation of creative teams which once again proved that the multilingual student is a reality!