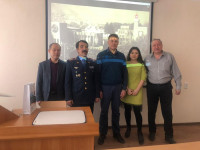 February 15, 2019 marks the 30th anniversary of the withdrawal of Soviet troops from Afghanistan
Battles end, but the story is eternal. The Afghan war also went down in history. But in the memory of man it to live for a long time, because her story is written with the blood of soldiers and tears of mothers.
This date was devoted to the round table on "Afghan war: causes, results, consequences", prepared by the departments of" General And special disciplines "and"Legal regulation of economic relations".
The round table was attended by the warrior-an Afghan police Colonel Toktobekova Sergali Zhumagulovich
Those present observed a minute of silence in memory of the soldiers who did not return from the Afghan war.
Toktabekov Sergali Zhumagulovich told the guests about his friends with whom he served, showed photos from the army album, awards.
The meeting was held on a high emotional level. Students with interest learned one of the difficult pages of our history.