Round table on the article "Seven Facets of the Great Steppe" 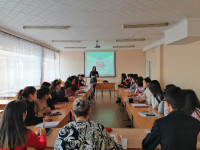 On December 13, 2018, a round table was held at the KEUK, to discuss the article "Seven Facets of the Great Steppe" of Head of State N.A. Nazarbayev. Round table was attended by students of groups IR-11k and IR-21k, as well as by teachers of the "World Economy and International Relations" chair, Kalieva G.K., Isataeva A.G., Sapar A.D. At the event, there were discussed issues of modernization of historical consciousness, the main imperatives and rethinking the role of Kazakhstan in world processes. In the ensuing discussion were also discussed the role of young generation in the promotion of history and culture at the present stage, the necessity to carry out research on the study of historical heritage with the formulation of specific tasks.