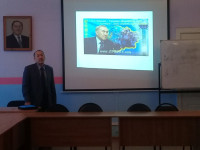 The Department of "Social work and APK" held a round table dedicated to the Day of the First President of the Republic of Kazakhstan, which was attended by students and teachers of the University.
The round table discussed the outstanding merits of the First President of Kazakhstan Nursultan Nazarbayev, his role as the Leader of the nation, in the establishment of Kazakhstan's model of public administration, the construction of its own statehood, the transition to a market economy, the creation of a democratic society and the strengthening of national consciousness.
KEU students who participated in the dialogue, stressed that under the leadership of the First President of Kazakhstan in a short time turned into an independent, politically and economically independent state; expressed his words of pride for his country, love for his native land, native land.
In conclusion, there was a film about the leader of the nation Nursultan Nazarbayev "The way of the leader: "Fiery river" and "Iron mountain".