Meeting with graduates of rural schools in 2019 Abay district. 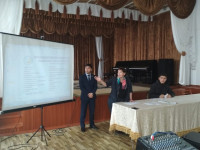 October 12, 2018 the Dean UFF Serikova G. S., vice Dean for VR FEU Yusupov M.T., master, lecturer of the Department "Banking management and financial markets" Isanov A. S., with the participation of the student volunteers conducted a career guidance for graduates of rural schools of Abay district, Abay DISTRICT,. Despite the remoteness of the villages of Abai district, such as southern, For, Topar and other village alumni and class leaders and the efforts of the DISTRICT attended the event.
Students were shown a video about the University, told about the benefits of studying at KEUK, about the rules of admission to the UNIVERSITY. From the mouths of schoolchildren have been told the positive reviews about KEUK. It should also be noted that school graduates actively participated in this event: they asked a lot of questions on the educational process, types of specialties, on the infrastructure of the University, etc.
The result of high-quality career guidance work was the organization of excursions and trial testing of UNT in the walls of KEUK in October-November 2018.