Meeting with the director of Center of полиязычного formation of KEU 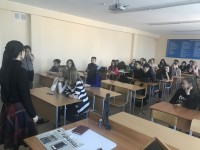 On April 20, 2017, the department "Accounting and Audit" held a meeting with the Director of the Center for Multilingual Education (CEE) of KEU Zhunusova AK, who told students and teachers about the work of the Center in detail. Undoubtedly, a multilingual education is one of the most important aspects of the economic and social modernization that is taking place in Kazakhstan's society. The participants of the meeting noted the relevance of the development of their linguistic consciousness, based on the mastery of state, native and foreign languages. The program of polyglot learning in the KEU contributes to the formation of a generation that is competitive in the conditions of globalization, who owns Kazakh, English and Russian languages. Participants of the meeting noted the uniqueness of the program of multilingual education, which provides the opportunity for parallel and simultaneous training in three languages.