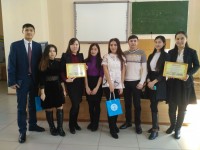 On 24th February, 2017 on the basis of the KarSU named after E.A. Buketov was held an annual competition of social projects "Innovative Approach to Social Sphere" among university students of Karaganda (Karaganda State University, Bolashak, KEUK). A total of 16 projects were submitted to the contest, in the main qualifying round took place 9 projects. Faculty and students of the group OPEC-21k, Sw-31k Department of SW and SPD KEUK prepared and submitted to the protection of the jury of the contest 2 social projects. According to the results of the contest of social projects group OPEC-21k, as part Kanatuly Zh., Berіkbay A., Yerzhan M took 2nd prize, a group of SW-31k, participants Askhatқyzy N. Karіmhan A., Ybyray A. received a diploma for active participation in the competition.