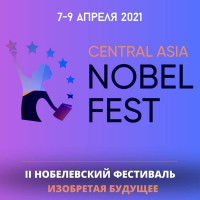 The "Foundation for Inclusive Development" with the support of the National Chamber of Entrepreneurs "Atameken" in the period from 7 to 9 April 2021 organized and held the Second Nobel Festival under the auspices of "Inventing the Future" (Central Asia Nobel Fest), which was held in the format of an online conference.

Within the framework of this Festival, a scientific and educational discussion platform for Central Asia was formed with the participation of outstanding scientists and Nobel Prize laureates, dedicated to the development of technologies and innovations in three main areas:

1) The Industry of the Future,

2) The Economy of Opportunity,

The Second Nobel Festival was attended by the leaders of the international organizations UNESCO, OECD, UNICEF, representatives of the largest companies Google, Twitter, Ford Motor, Bloom Energy, as well as outstanding world scientists and experts.