"The December uprising is the struggle of Kazakhstani youth for independence" 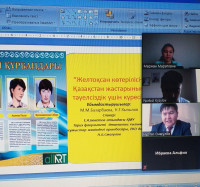 And again December ... again the moment when we remember our heroes. An event was organized by the teachers of the Department of SR and ANC of the University Bazarbaeva M.M., Tutinova N.E., Kyzylov N.T., who not only remember, but also know about the merits of our independence, who came with the blood of our compatriots, who are not indifferent to our country. Specially invited lecturer, Deputy Dean of the Faculty of History of KarSU named after E. A. Buketova on scientific work, PhD, Mr. Smagulov N.B., explained in detail what happened. In addition, the students were shown videos in Kazakh, Russian, and the importance of the topic with an in-depth study of history was revealed.
In December 1986, coming out to the square and protesting against Soviet power, the young people undoubtedly dreamed of gaining this freedom. Indeed, the December uprising was an event that made us feel the Day of Liberation approaching. Everyone knows that after December in different parts of the country of the Soviets there were various unrest, and finally, after 5 years, the Red Empire collapsed. Historical justice or coincidence? In the December uprising, by a resolution of the Central Committee of the CPSU, an assessment was given to "the manifestation of Kazakh nationalism," and citizens who participated in the uprising were subjected to repression. Undoubtedly, the liberation struggle of the Kazakh youth against the totalitarian, colonial policy of the USSR was an important historical event.
December uprising - protest actions of Kazakh youth against the colonial, command-administrative system of the government of the USSR, which took place in Almaty from 17 to 18 December 1986. This is a significant event in the history of Kazakhs striving for freedom and independence.