Football tournament among Universities of Karaganda 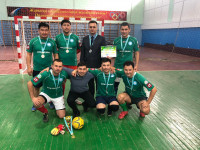 On October 19, 2019 in the sports and recreation complex KEUK passed traditional tournament on mini-football among Universities of Karaganda.
The tournament was held in honor of the implementation of the address of the President of Kazakhstan K. K. Tokayev "Constructive public dialogue-the basis of stability and prosperity of Kazakhstan" from 2.09.2019 in terms of strengthening the health of the Nation and the development of mass sports among all age groups.
The tournament was held in a round-Robin format, where the winner and runners-up were revealed by the points scored in the matches. It is worth noting the team-universities of the University them. E. A. Buketova, MVD Karaganda Academy, KSTU and KEUK showed a high level of professionalism and skill in the football tournament.
According to the results of persistent and spectacular matches prizes were distributed as follows:
1-place: Karsu them.E. A. Buketova; 2nd place: KEUK; 3rd place: MIA Karaganda Academy.
All winners were awarded cups, medals and certificates for active participation.