Report about passage of studies at the Mendel University in Brno, Brno, Czech Republic under the program of academic mobility 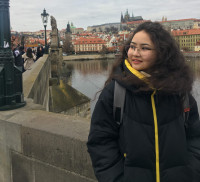 I am Sharipova Sanim, a 2nd year student of the Karaganda Economic University of Kazpotrebsoyuz, majoring in Tourism, studied under the academic mobility program at the Mendel University in Brno, Brno, Czech Republic from October 15, 2019 to February 6, 2020. In a foreign university I studied subjects such as Business Ecomomics I, International business culture and communication, Project management, Security and safety of developing countries, Utilization of natural resources, Fundamentals of Regional management, Sociology.
Mendel University in Brno is one of the oldest universities in Czech Republic. It was founded on 24 July 1919. It is named since 1994 after Gregor Mendel, the botanist and "father of genetics", who was active in this city during his lifetime.It now consists of five faculties and one institute. Currently, more than 10 thousand students study at the University.
Alongside with Czech students, I studied with students from Germany, Poland, Australia, France, Finland and other European countries. Accordingly, the studies took place in English, level of English language among students and teachers was at a high level. We worked in groups with other students, which allowed us not only perform tasks together, but also share their horizons, culture and traditions of their countries. Final scores were exhibited in accordance with presentations and final exams. Over the weekend, I managed to visit various cities of Czech Republic.
Of course, all the knowledge gained during training will be useful to me both in everyday life and in a future career. Period of my semester studies at the Mendel University in Brno is a time of gaining invaluable experience in studying in a completely different university tradition, acquiring acquaintances that will be useful in the future, and, on the whole, versatile development and broadening my horizons.
I would like to sincerely thank our university and our rector, Aymagambetov Yerkara Balkaraevich, for the opportunity, to study at one of the best universities in Europe, and also to our International Center, which helped with all the documentation and emerging issues.