Report about the training at the University Babes-Bolyai, Cluj-Napoca, Romania on a program of academic mobility 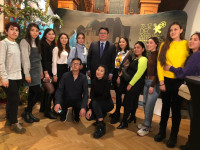 I, Abdukayumov Temur, the 4th-year student of the Karaganda Economic University of Kazpotrebsoyuz, in specialty of International relations, was trained in the academic mobility program at the University of Babesh-Bolyai, Cluj-Napoca, Romania in the period from November 5, 2019 to January 28, 2020. At the University, I studied such subjects as Modern economic systems, Terrorism and security threats, theories of International Relations, theories of European Integration, Analysis of international relations, Foreign policy and diplomacy.
Today, the University of Babes-Bolyai is considered to be the largest by the educational standards of Eastern Europe. The second place among the most prestigious Universities in Romania allows the University of Babes Boliai to remain one of the most prestigious places of higher education in the country. In the national academic ranking, UBB has never left the top five.
Along with Romanian students, we also trained students from Georgia, Bulgaria, England, Moldova, and Finland. Accordingly, the training was conducted in English, and the teachers ' level of English was at a high level. The most interesting and impressionable thing was how many-sided the training sessions were in different formats of students ' education. We worked in groups with other students, which allowed us not only to perform tasks together, but also to share our Outlook, culture and traditions of our countries. The final grades were set in accordance with the final exams conducted , as well as on the basis of attendance and academic performance during the semester. Also on weekends, in addition to training, we got acquainted with the culture of the eternal historical city of Cluj-Napoca and its inhabitants, attending various cultural events.
Of course, all the knowledge gained during training will be useful to me both in everyday life and in my future career. The period of my semester of study at Babesh-Bolyai University for me is a time of getting invaluable experience of studying in a completely different University tradition, acquiring skills of establishing communications with people from different countries.
I would like to sincerely thank my University and our rector Aimagambetov Yerkara Balkarayevich for the opportunity to study at one of the best universities in Europe, as well as our international Department, which helped us to go through some difficulties with documentation.