Admission to universities of Kazakhstan is carried out on a competitive basis to the statements in accordance with the points of the certificate of UNT:

• for full-time or part-time education of the college graduates to undergo CTA from June 20 to July 9, 2016;

If the applicant (graduate of the school or college) did not receive a passing score (50 points), or did not participate in the UNT or complex testing, he or she has the ability to pass the re-integration testing (in August) in order to enroll in the university on a fee basis.

Conditional Admission - Applicants who are not scored a passing grade (50 points) on the UNT or CTA (in July), and re-testing (in August), may be credited to conditional listener 1st year full-time training on a fee basis to the end of the first semester and pass ( in January), additional integration testing.

Admission of foreign citizens to study in higher educational institutions on a paid basis is carried out in the form of an interview.

22.04.2016 Department of Commodity and certification holds contest of creative works for students 1-4 course KEUK, college and graduation classes of schools of the city of Karaganda, dedicated to the 50th anniversary of the Karaganda Economic University.

In 2016 K EUK marks the 50th anniversary. We ask you, the graduates of different years, who reach a high results in their work and in their careers, to inform us, as well as to inform our graduates who you communicate with, that we want to obtain information about your achievements. 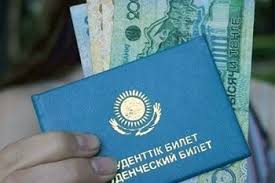 On the basis of the action Plan for the implementation of anti-corruption program of the «Nur Otan» party from November 11, 2014, which was recommended by the anti-corruption coordination council and postgraduate education of the Republic of Kazakhstan, in order to develop in the student diversity and youth the manifestation of intolerance and corruption signs, there were headquarters set up for the organization and conduct of the action «Clear session».
In the process of carrying out the action «Clear session» there were conducted surveys of students to identify the facts of corruption in the university, a series of lectures were made on moral norms and civic youth anti-corruption, organized seminars, meetings of the representatives of law enforcement agencies with students, held curatorial hours.

We congratulate the basketball team of the University for winning the "Student League" champions title of the Republic of Kazakhstan.

We congratulate the mini-football team of our university with the victory in the first round of the "Students League" in Karagady. 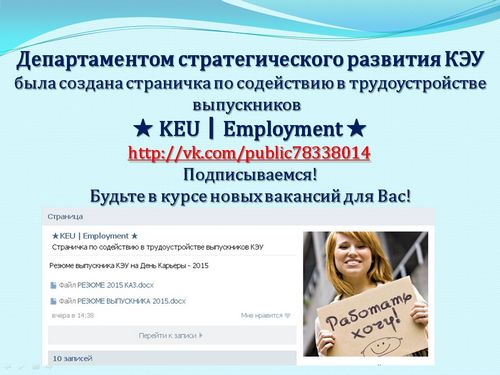 Strategic Development Department of KEU has created a page to promote the employment of graduates.

Stay informed of new jobs for you!